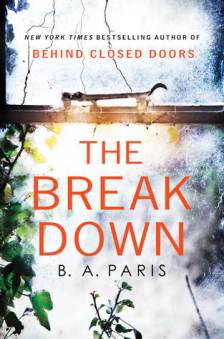 Simply put, “The Breakdown” blew my mind. Now, it’s fair to say that many readers may have saw the ending coming, but I honestly did not. I had thought I’d been clever enough to figure it out but I was sorely wrong.
My main complaint about “The Breakdown”, and this complaint was almost enough to drop the rating to 4 stars, is the pacing. There were multiple moments throughout the novel that I felt bored. The scenes felt repetitive and unnecessary, like I was struggling to get to the point of the book. But once I did, it all made sense and it made it totally worth it.

Struggling with her mental health, Cass tells the story over a period of almost four months. More than once I felt tears threatening me because of Cass’s complete and utter vulnerability. I felt for this character, which is the #1 sign of a well written novel. I also felt annoyed at her own idiocy at points, and the fact that I was supposed to assume this Cass that I, the reader, know is not the Cass she’s always been. Still, though, B.A. Paris did a great job with building empathy for her characters. Cass was exhausted and scared, therefore I was exhausted and scared with her.
Quite possible the best thing that Paris did with this novel was the anticipation. I could have been extremely bored (which I wasn’t) but I still would have kept reading because I NEEDED to know the truth. Who killed Jane? Why was Cass feeling so guilty? Who was her silent caller? What was the truth of her memory failure?
So it only took two days before I’d finished this story, freaking out at the ending (I will not spoil this for you) and I highly recommend it to anyone considering this novel or anything like it.

I’m frustrated that I’m giving this book such a low rating because I truly did enjoy it, but it wasn’t entertaining enough to make up for the poor writing.
The amount of times my ‘fictive bubble’ was popped by the writer herself is unforgivable. I rolled my eyes every page at a cliche, overused or repeated word, out of character dialogue, unbelievable turn of events, or convenient fixes to the character’s problems. Ever heard of ‘when in doubt, kill someone’? Bella Forrest does this. Ever heard of ‘Never save your characters through divine intervention’? She also does this.
Over explaining things to the point that the readers can’t picture it? Does this.
Overly uses adverbs? Check.
Leans on the love story to keep reader’s attention? EYEROLL.
Forgets about a character till they’re needed? Why even assume she wouldn’t?
Stating the obvious/Repetitive explanations? Forrest patronizes the readers and doesn’t trust in our wisdom and ability to follow along with her stories.
Having your characters act OOC to fit a scene? I didn’t even recognize some of the main characters.
I could go on but my point is this: Every mistake a writer could make while self editing or writing, Forrest makes. A couple I can forgive if the story is strong enough to overlook or if the mistakes are few and far between. But Forrest did it so often and so badly in an already poor plot-driven novel, that I ended giving her two stars.
I did give her two, however, instead of a measly one she may have earned and here is why:
I still found myself hooked to the end. I was annoyed and frustrated, but I still longed to know what happened next. I didn’t recognize the characters, but I still cared about them and wanted to know what would happen with them. Unlike in ‘The Gender Secret’ there was little character growth, something that a novel NEEDS to be transformational, but the plot was still intriguing. It was juvenile and lazy, but still exciting and adventurous. I cared because of the first two books of the novel. I’m holding out hope for the next one, but if this novel was standalone, I would be angry I spent my time on it.

To go into detail about some of my issues I’ll have to talk freely, so if you don’t want spoilers, stop reading now.
The boys of Matrus, including Violet Bates’ younger brother, Tim, were discovered in the end of the second book. This book was set up to deal with these hundreds of boys as a major plot point, but does so poorly. Found in dangerous cells after being experimented on for years and years, these boys are broken and scarred, though Forrest conveniently only reminds us of that and shows us once in a very calm outrage Tim has. We only see the boys as an accessory to the plot, not being true to the trauma they must be dealing with. Laziness takes over and Forrest fixes the boys quickly to move the plot forward. She uses them as a tool, just like the characters in the novel.
It’s almost as if she forgot about them halfway through the book and went ‘oh, yeah… I guess I should incorporate them somehow’. They were not given the page time they earned, and instead had a few scenes of ‘training’ before the boys were immediately being used by the rebel faction leader (who plot twist, was actually lying to Violet about using the boys, who plot twist, uses them to start a war between Patrus and Matrus, who, plot twist, is actually working for the Matrus queen, who plot twist, had planned on being queen and her mom dying all along, who plot twist STOP.), Desmond.
Speaking of, the entire first half of the book was Violet going on a mission to retrieve a laser to fix Viggo’s heart. This is all well and good, but, WHY? Why did this deserve so much time whereas these boys, whom Violet has been wanting to find for YEARS, got a measly few chapters?
Along with the boys, apparently Desmond has a second son who was one of the boys named Jay. Do you know when we hear about them? When our heroes need a miraculous save after being thrusted in the Green to die. OH YEAH JAY EXISTS AND HES HEAR TO BRING YOU SUPPLIES AND HELP. Thanks a lot.
Also, the love story. After two books of ‘will they or won’t they’ all of the sudden Viggo and Violet are basically married. (Viggo literally has the thought that he wants to marry Violet… to sleep with her). This was not earned or warranted. YES, they care for each other, but there relationship jumped forward two years with no explainable reason how.
Finally, who the F**K is Viggo in this book? I LOVED HIM. In the first book, I fell in love with Viggo with Violet. He was a wonderful character with rough edges and a warm heart. The second book shied away from that slightly, but this is because we got an insight into his mind, so I forgave Forrest. But now? Viggo is not Viggo, he is whoever he needs to be to aid the plot in moving forward. I don’t care about this Viggo. At all.

I have more complaints, but this seems enough for now. I WILL continue reading because as I’ve said, I’m already invested, but I pray the next book is significantly better because this one left me sorely disappointed.

I have a lot of thoughts on this book and I count that as a plus. But this book is discussion book. It’s the sort of book you write a paper over for school, because it does have so many themes and interesting discussions.
This novel is not a plot driven novel by any means, in fact I would more categorize it as a fiction memoir. It’s written extremely well and the characters, Kathy, Ruth, and Tommy, have been carved to perfection. This is what propels the story forward: the topics and characters.
One thing I truly appreciated about the novel is that Kazuo managed to capture emotions and events of childhood better than most. There were many moments I found myself in awe at the sheer accuracy of how children act and think, and the reasoning behind it.
However, as a writer, there is too much about the book that irks me to truly love it.
The lack of plot, though almost made up for, is so glaring that I find it odd the writer was ever able to publish to begin with. There is absolutely no tension or desire for an ultimate goal in any of the characters. It’s like a pimped out car that has no engine. It looks pretty, yes, but it’s not going to take you anywhere.
Second, the love story. I’m afraid it has been advertised as a romance in vain. Though there may be a romance, it comes out of no where in the last fifty pages of the book. Kazuo does an INCREDIBLE job at building a friendship between the characters. Perhaps too good a job as after endless pages of little antics proving how close friends they are, the romance seems implausible. It wasn’t built up properly and their was no heat between the characters before suddenly *poof* they’re in love.
Lastly: the lack of information before an enormous infer dump. For hundreds of pages we are left to Kathy’s memory, sometimes getting a bit of information from her guardians (Mrs. Emily) or her own wit, but really with no real concrete reason as to why their lives are what they are. Then, as if remembering to add vital information but too lazy to incorporate it into the novel, our author gives us an almost four page long explanation to this world… right before the end of the book.
Info dump is never a good idea, especially at the end.
This novel is interesting but Ishiguro took multiple shortcuts in writing it, ultimately leaving it a three star book.