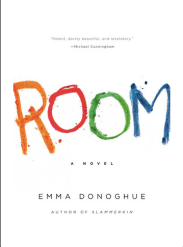 Told from the perspective of five-year-old Jack, Room, written by Emma Donoghue, takes readers on an exciting, emotional journey. The novel opens up to the morning of Jack’s fifth birthday in “Room” where Jack and his mother, “Ma”, have lived for his entire life. Readers explore this world in Room through the eyes of Jack, seeing everything as if it were the entire universe, which is what Ma told him. However, the need to be free after eight years being imprisoned drives Ma to come up with an escape plan. This involves Jack feigning his own death and running from “Old Nick,” their captor, after jumping from his truck. During his “Great Escape,” Jack is able to get away and explain to the cops what happened to him and Ma. The police save her and arrest Old Nick. The story, far from over, continues to follow Jack as he discovers the outside world. Readers see both Jack and Ma deal with the trauma, fear, confusion, and consequences of what they went through. The themes touch on the troubles of one’s reality completely altering, positionality, and rape.

An emotional story told from a unique point of view, Room is definitely one I would recommend to others. The simple, yet equally strange, viewpoint that Jack has on the world is one I believe many adults could benefit from reading. In addition, the experiences that Ma goes through are important and should be discussed further. Room deals with heavy situations and feelings, showing what it looks like to rediscover the world and suffer from an unfortunately frequent crime. Freedom, confinement, rape, and power are all themes that readers will discover in the pages of the novel, and the social views it offers are valuable. The novel is not only highly entertaining and emotional stimulating, but also philosophical and educational.

This book will definitely get you thinking and will pull at your heartstrings. Very few books have made me cry but this one definitely did. It was filled with so much emotion and tension and I really enjoyed the adolescent voice used via the POV.

Definitely give this book 5 stars and if you ever get the chance, you should read it.