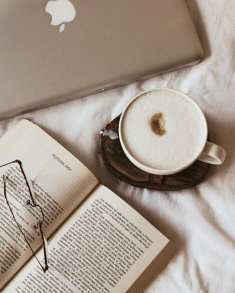 Through many years of school, researching, editing, and writing, I’ve learned a lot about the world of writing. Here are 15 of the most common mistakes I see writers make. (Also 15 examples of a book or author I think exemplifies the correct way to do these.)

People read because they want to fall into a new world, be distracted by their own, experience something they haven’t, or learn something new. If they wanted a straight forward list of facts, they would go to Wikipedia. Whether you’re writing nonfiction or fiction, you need to pull the readers into the story. They should be completely enveloped by your world.

So, instead of simply explaining to your readers what’s happening, you need to let them in and allow them the opportunity to experience it as if they’re actually there. If you’re unsure how to do this, the best way to start is by engaging the five senses. See, hear, touch, smell, and taste. In your fiction book, enter each scene asking yourself what the characters are seeing, hearing, touching, smelling, and tasting. The same can be said for your nonfiction work, though you may have to alter depending on your genre.

For example, you should pretty much never write “Alex was obviously sad.” Instead, try “Alex wiped a tear from her cheek and turned away from her friends, sniffing.” or “Alex walked slowly into the building, wearing a hoodie that hung loose on her frame and was spotted with stains. Gravity seemed to pull on her shoulders and limbs, making every movement difficult. Her eyes, dull and sunken, filled with thick tears.”

In a nutshell, showing is about using description and action to help the reader experience the story. Telling is when the author summarizes or uses exposition to simply tell the reader what is happening.

Unless you’re Beyonce writing a memoir, John Piper writing another Christian self-help book, or Stephen King, you can not make the assumption that your book will find readers and you DEFINITELY can’t assume the readers will care about what you’re writing.

That’s why you have to make them care… in the least creepy way possible.

As soon as you assume readers care about what you’re writing, your book will become dry and uninteresting. I once edited a memoir that had the most detail anyone could ask for. I’m talking physical addresses for every single location in the book. And the more pointless information I got, the less I cared. I didn’t get emotions and character development, I got birth dates and timelines.

If you’re not making the assumption readers will instantly care, then you’ll start writing with the goal to make them care. You’ll create multi-dimensional characters that the readers relate to and care about. The stakes will rise and you’ll flush out the threat and risks facing your characters and vulnerability of the story.

And in nonfiction, you’ll explore why they should care. You can’t assume they just do or that they’ll care about you (because let’s be honest, if you’re not famous, only a handful of people will read it because they care about you). So you’ll realize they should care because they can learn something or experience something unique and you’ll learn how to write it in a way that proves that to the reader.

MVP – A Court of Thorns and Roses series by Sarah J. Maas

Adverbs can work… sometimes. But they rarely work as often as writers use them. They create another problem writers often face, which is falling into the passive voice. This is similar to problem number one, which adverbs also cause.

Which sentence is better? “Mike ran slowly.” or “Mike took his time with the run, indifferent to the shouts coming from the coach.”

Adverbs are not always bad but very often new (and veteran) writers will expect adverbs to do all the descriptions for them. Think about them like dandelions. One, or even a few, in your garden are pretty. They even have some benefits (like the medicinal uses). But, if you don’t remove them early then before you know it, one turns into an infestation with roots so deep it’s near-impossible to remove them and you see them as the weeds they really are.

Stephen King once said, “I believe the road to hell is paved with adverbs, and I will shout it from the rooftops.” I, for one, think King’s success in writing is enough to get other writers to pay attention to one of his biggest pieces of advice – avoid adverbs.

Adverbs are often crutches, filler words, and a writer’s training wheels. It’s time to remove them and get on a big-kid bicycle.

MVP – Daughter of Smoke and Bone by Laini Taylor

I’m looking at you, JK Rowling.

Listen, I get writers want to spice up their novels sometimes. They want to be sure everyone knows their character is YELLING AT THE TOP OF THEIR LUNGS or even hissing… which… what? 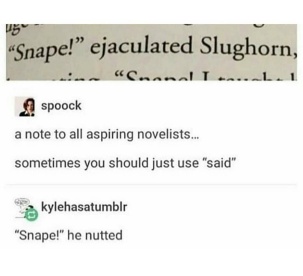 One of the writing proverbs is to avoid dialogue tags like hissed. It’s used a lot, but quite often, it’s used where it’s unwelcome. I bet we’ve all seen this dialogue tag abused. For example: “Get out,” she hissed. OK, you try it — hiss that line.

Feel stupid? Because I do.

I’m particularly guilty of this one. Dialogue is my favorite but if I’m not careful, I fall into what we call the “floating head syndrome.”

This is when your characters are having a conversation and the only thing written is their dialogue and the occasional dialogue tag. The reader gets lost and soon the scene disappears and they have no idea where the characters are standing and what they’re doing. It’s just their heads talking and readers can’t visualize the actual scene or any action. This does the one thing all writers need to avoid at all costs – pulls the reader out of the story.

If I’m reading a book and it’s just Alex and Mike talking for a page then suddenly, Alex opens the fridge, I’ll get confused and stop reading because I could have sworn they were driving.

To avoid this, fall back on your five senses. Give Mike facial expressions and have Alex walk around the table and lean against the counter as she’s talking. Refer to the setting, temperature, and what they’re smelling. Have Mike get distracted by a dog or cars honking. Or, convey emotion by tears springing to Alex’s eyes while Mike yells.

This applies for fiction and nonfiction. Whatever you’re writing, you should always know stuff your readers don’t.

Readers may not need to know that Mike lived in 14 different cities growing up, but you should because you did research on what it’s like to be an army brat and this is important because it shaped who Mike is. It’s a reason he doesn’t trust Alex and won’t let himself fall in love with her.

This is particularly important if you’re writing something you’re unfamiliar with. If your story is set at NYU but you didn’t attend that school, you need to do plenty of research (even if you use none of it). You should know what dorm life is like there, how students get to buildings, and how big the classes are.

If you’re writing nonfiction, this may apply even more. (Even if you’re writing a memoir/from personal experience). You need to research the science behind forgiveness and the original Hebrew meaning of that verse you’re talking about.

There is rarely such thing as too much research but there’s very easily too little. So, when in doubt, research.

Writers are notoriously known for being introverts who don’t know how to interact with people. There is nothing wrong with being an introvert (I’m one myself) but you can’t hide in a cave when you’re writing.

You become a cave writer when you don’t tell anyone you’re writing. If you’re afraid of failing, then find one friend that always encourages you and tell them. But otherwise, start talking.

In NO means am I saying you need to become an annoying spanner on social media or brag about writing 1,000 words. Don’t oversell yourself but you need to start establishing a platform. (Especially if you’re a nonfiction writer.)

Start a blog, add “writer” to your bio on social media, share stories with your writer friends so you can edit for each other, reach out, and get help. Writing is not as solitary as people assume. You need a second pair of eyes, a beta reader, a sensitivity reader, an editor, etc. And most importantly, you need readers.