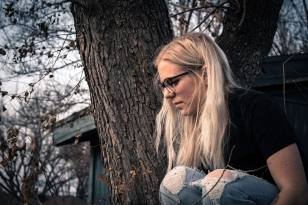 I don’t know what sort of faith Adolf Hitler had. He was born to a practicing Catholic mother and was baptized in the Roman Catholic Church. From a young age, he expressed disbelief and hostility to Christianity. And he obviously was hostile towards Judaism. Hitler wanted to reduce the influence of Christianity. It seems to me, he didn’t need God because he wanted to be god. His faith was in his own power.

Sometimes I don’t know what sort of faith I have. I think I do, I hope I do, but I’m always wondering. I visit the faith I want, treating it like a vacation destination. When I’m in pain, I tour a church. When I doubt, I read the plaque of faith, hoping it will give me all the answers. But I’ll leave and return home to the place I know well. Where I don’t need God because I can be god.

I try to figure out who I am, so I know where I belong and where I’m just touring. My mom says we’re German. A mix of things, really. Irish and English and French. But the largest ethnic component, about 34%, is German. I look like my great-grandma, who was 100% German. Blonde-haired and blue-eyed. Protestant and middle class. Sitting in comfort and touring.

Staying at home, where I’m comfortable but bored, makes me restless. Reckless and hungry for whatever is next. I crave to be where I’m not known and where I do not know. Let me let you in on a little secret: when you stand still, when you stop moving and stop discovering, stop touring, you sink. When I start sinking, I feel the claws of apathy wrapping around my throat, threatening to make my world go black. So, I take a breath. I look forward and I book another flight. And when everything feels heavy, I learn to travel light.

The Netherlands became my escape and I use it to tour the corners of my mind. The hallways of my faith. Coffee shops and cafés and boat rides. I tour and yet I’m angry I feel like a tourist. My faith is too comfortable in my mind and in my heart. I’m moving and yet I still think I’m sinking. I’m numb.

I went to the Anne Frank museum on a date with a cute boy named Collin. The house has been commercialized, turned to a museum. Most of the furniture has been removed to make room for plaques and photos. Areas are roped off and bedrooms are choreographed into still lives of what may have been decades ago. Tickets are sold to tourists wanting to see all the sights. I was 17 and didn’t want to be considered a tourist. After all, I’d already lived in Amsterdam for three months.

I walked in front of a 20-year-old boy from Missouri who had even fewer connections to the Holocaust than I did. I barely read the plaques or took in the enormity of the building I was in. It was intangible. Instead, I wondered if Collin was ever going to hold my hand.

Anne Frank had faith in a God she could not see in a time when she saw nothing but misery. She had faith in humanity when humanity was torturing and killing each other for that very faith. Anne Frank said, “People who have a religion should be glad, for not everyone has the gift of believing in heavenly things,” but belief didn’t feel like a gift. It feels like a destination I haven’t figured out how to call home yet.

The Ten Boom family lived in the Beje house above a watch shop in Haarlem, The Netherlands. It was made up of small rooms and tight hallways, a humble home for a humble people. The family’s Calvinist faith inspired them to serve society, offering shelter, food, and money to those in need. In this tradition, the family held a deep respect for the Jewish community in The Netherlands, considering them “God’s ancient people.”

The Hiding Place was on the syllabus for my ninth grade English class. I read it twice because the first time I didn’t pay enough attention. I hated the words I was reading but had no emotional reaction to them. Our teacher assigned a response paper to the book and I knew what she wanted. Our reactions to the travesty of the war and how big a role faith played. She wanted us to stand in the same spot as the Ten Boom family and all those they helped. That was the only B I made on a paper that year.

One day, I toured the Beje house. The train ride to get to Haarlem was twenty minutes and I loved every second of it. I rested my forehead against the cool window and watched the countryside zoom by. My friends laughed and read books and I wondered when I would stop feeling like a tourist.

I stood in the exact place hundreds, maybe thousands, Jews stood seventy years ago. A two-foot wide gap between bedrooms, only accessible through the secrete door in the bottom of a bookshelf. To access the hiding place, you had to crawl through the bottom. I stepped through a manmade hole in the wall. Nestled in a vertical coffin that promised life rather than death in the middle of Haarlem. I tried and failed to know what it would have felt like to feel trapped in that small, dark sliver of space. To put all of my trust in a stranger, in the small, dark hiding place in the Netherlands. I couldn’t get past my own life experiences. My own flimsy faith.

If I had been alive 60 years ago, I never would have stood in that space between walls. I’d have been safe. I wouldn’t need to have faith in a hiding place or a stranger living above a watch shop. Really, I’d only have needed faith that the new regime would continue to favor me and my blonde hair. I’d have never seen the inside of that vertical coffin. I wouldn’t have been a tourist or a guest or a hidden secret in between walls.

Do I know that for sure or do I just see it in passing, while touring someone else’s faith? While reading about the marvelous works someone else can do through their faith but not truly understanding it? While standing in the hole of an unassuming wall, smiling for a selfie because I’m in a cool place but not living in the knowledge of what that place means?

I am a tourist of my faith. Corrie Ten Boom knew Jesus as victorious and lived in that knowledge, dedicating her home and life to hiding hundreds of Jews from the hands of others. Her faith and how she lived in it was written about, told of for generations. Anne Frank was a child when she died and spent her whole life with the label of her religion, of Judaism, and yet she did not lose her faith. Adolf Hitler hated religion and yet he capitalized on it. He murdered, and he gained power, often because of, or in the name of, religion. He had faith in himself and, though it caused devastation, he lived in that faith.

I am a tourist of my faith. I am visiting the Corrie Ten Boom house, smirking at a cute boy in the museum where Anne Frank once lived, and I hold the DNA that one of the most vicious dictators in history saw as superior. I am reading about their faith and touring, wondering what I can take home and what I must leave behind.

I am a tourist of my faith. I do not know the sufferings many know because of this faith. I visit church and I pray, but I always leave. I return home to my comfy, sinful, faithless life. I indulge in the hospitality of my host, the King of Kings. I accept his gift and I eat his dinner. Then I leave again. I do not treat my faith like the home that it is meant to be. I treat it like a tourist. I look at the pretty sights and read the plaques and think